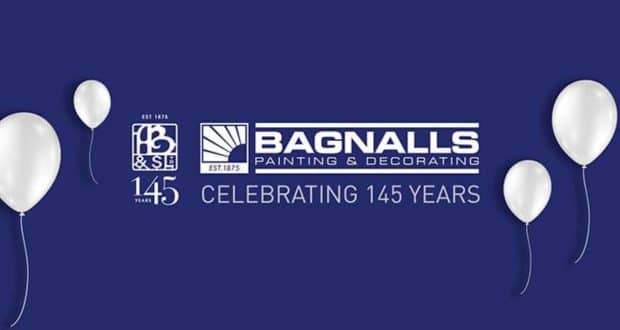 National painting and decorating contracting company Bagnalls is celebrating its 145th year in business on March 13th, 2020. This date marks 145 years since the business was founded in Shipley, West Yorkshire by Alfred Bagnall.

The business began in 1875 when Alfred Bagnall and Cornelius Lupton were approached to paint a bridge in Charlestown, Shipley. The job was quoted at £258 and this was the first project undertaken by the company.

Since that date, Bagnalls has worked on some of the UK’s most iconic buildings and structures including the award-winning Souter Lighthouse, a National Trust property in the North East and the award-winning Docklands Light Railway Bridge which spans the Canary Wharf complex in London. The business was also contracted to complete works on the Empire Stadium, known later as Wembley stadium, in time for the FA cup final held in April 1923. Almost a century later, Bagnalls was hired to apply specialist external coatings to the nearby Wembley Arena.

Bagnalls has since grown to be one of the largest painting and decorating contractors in the UK, with 16 branches across the country. And, the business is still proudly headquartered in Shipley and retains its strong family heritage with current Group Managing Director, Stephen Bagnall, the fifth generation descendent of its founder at the helm of the business.

145 years is a significant milestone for any business. Reflecting on the anniversary, Stephen Bagnall is looking towards the future:

“I’m proud that our family business has grown so much since it started right here in Shipley. I owe our success to the generations of people who have dedicated their careers to Bagnalls and delivered some outstanding work, without them we would not have achieved this headline milestone.  We have worked on some truly iconic projects that we can look back on with pride. We’ve managed to grow to a nationwide contractor and employ hundreds of people across the UK.  We have also developed an award-winning apprenticeship programme which has seen many individuals progress from apprentice painters through to Branch Managers and Directors. I’m so proud of the team and all of its achievements and can’t wait to keep growing into the future.”