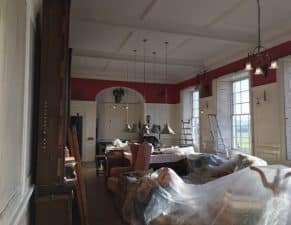 Bolton Hall is a Grade II listed building, situated in Wensleydale, North Yorkshire and has been the family seat of the Orde-Powlett family since 1678. The house was re-built in 1902, after the original hall was destroyed by fire. Redecorating historic buildings of this nature, takes careful consideration of the original construction materials and it is essential that work is carried out sensitively with the original features of the building.

Lambert’s Decorators were recently called in to re-decorate the old billiard room, that is now going to be used as a drawing room. 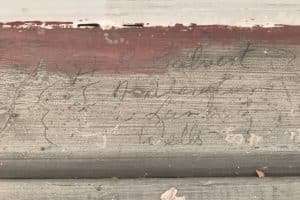 Tim Lambert, Managing Director of Lambert’s Decorators said, “The room was in a fairly bad state of repair, as it had not been decorated since 1957. We know this because we discovered the signatures of the previous decorators, one of which was my father, Denys Lambert”.

Tim’s son Adam is also following in his Grandfather’s footsteps and has joined the family business and assisted his father on this project.

It appeared that there had only been two coats of paint applied to the ceiling since the house was built. This was in poor condition and the ceilings had a lot of cracks in them. A huge a amount of preparation was needed prior to commencing any redecoration. In order to prep the ceilings, they were dry scraped, raked and the cracks were filled with alabaster filler. 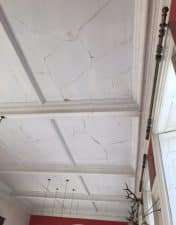 A surprising find was that the cornice, was not plaster but constructed of wood, built up in sections to give the finished appearance. On starting to prep the cornice they discovered it had been grained in light oak to match the flooring. This was rubbed down and filled prior to painting.

The flat beds of the ceiling were also rubbed down and any lose materials removed. The ceilings were then primed with thinned down Johnstone’s all-purpose oil-based primer, to enable it to penetrate the old paint that binds it altogether, to help to prevent any flaking. Two top-coats of Johnstone’s breathable emulsion paint were then applied as the finishing coats. This exact same process was carried out on the frieze above the panelling. 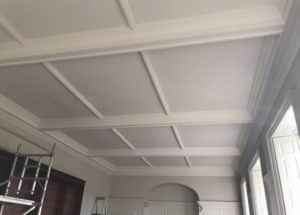 The wooden panelling was originally painted in an oil-based eggshell, which over the years, accumulated a substantial amount of residue from the open fire and gentleman using it as a communal smoking area. All the panels were washed down with sugar soap and sanded to remove any brush marks. This was achieved by using a Makita orbital sander starting from an 80 grit to 240 grit and a final sanding using ‘wet and dry’ paper. All the cracks in the moulding were raked out and the mouldings were filled using Everbuild decorators caulk, helping to prevent cracking in the future. This was deemed the best method, as the house heating system has recently been upgraded and there may be more expansion and contraction of the timber. The panels were then undercoated using Johnstone’s oil-based undercoat, which were then ‘wet and dried’ and two top-coats of Farrow and Ball dead flat paint was applied. 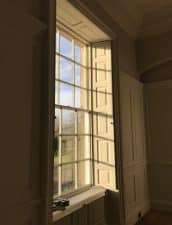 The window shutters were in a terrible state of repair, due to the house being south facing. The lead-based paint had simply turned to powder. Due to the toxicity of the paint, a thin layer of Peel-away paint remover to safely remove the paint. They were then prepared in the same method as the wooden panelling. The sliding sash windows were all rubbed down, primed and back filled with linseed oil putty, rubbed down, undercoated and two coats of Farrow and Ball eggshell finish was applied.

Tim said, “This room was a big task with a good few weeks of preparation before we even began to apply any paint, but the end product was very satisfying and successful. Thankfully, we had very happy clients who were delighted with how the room turned out”.

Lambert Decorators is located in the town of Leyburn, North Yorkshire and was founded by Tim’s late father, Denys Lambert in 1973. Tim left school aged 16, in 1980 and started his apprenticeship in the business. Studying Painting and Decorating at Darlington College Tim finished City and Guilds Advanced Crafts with Distinctions.

In the mid-80s the company moved premises and Tim’s Mother and Sister joined the family business. They are florists and they took the opportunity to expand the business and Lamberts Florist was born.

Lamberts Decorators undertake all aspects of decoration and are fortunate enough to be able to work in beautiful country homes.

If you would like to submit a project to be considered for November’s Project of the Month submit your project using the button below by the 18th November we will make our selection. * 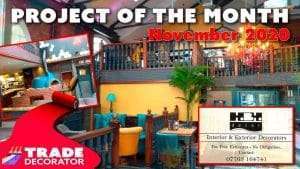