From ruin to redemption This 120-year old private residence in Cowdenbeath, West Fife, Scotland, has had several different uses throughout the years. At one time it was a dentist, then a bank and then a hotel. However, as work commenced to convert the hotel to a family home, a nightmare experience with cowboy decorators left new owner Raja Waz, worried he’d lose the house before his family had even moved in. The owner was so stressed as the house had been left like a building site. Fortunately, a chance encounter via a mutual friend led him to an introduction to John Donnelly of Décor by Design.

Raja asked John for advice as he’d had 2 or 3 painters in to do the work and they’d absolutely ruined it. The plasterers had also done such a shoddy job that John had to tape and fill every room in the house, with Gyproc Easifil, which took over a month to prepare before redecoration could begin.

The client let John have free reign with the colour schemes and design of the house and it is evident from the pictures John has a real flair for design. Each room is stunning, has its own identity and is decorated to the highest standards.

The materials used on the job were all from Crown Decorating Centre. All woodwork was prepped and painted with Crown acrylic primer undercoat and satin topcoats in the bedrooms. Banisters and railings had previously been painted in a dark exterior fence paint which was a nightmare to cover. This was all painted in a Crown all-in-one oil-based primer, undercoat and topcoat and had 3 coats. All the details are picked out in white satin oil and metallic gold and the front door was matched with the staircase.

There are 35 doors and frames in the house and each of the solid oak doors had 60 nail holes per door and frame. They were a nightmare to do as they had to be filled with bees’ wax and finished in Sadolin classic wood protection clear varnish to ensure a perfect finish. The walls in the hall, stairs and landing were all filled, taped, sanded and sprayed with a mist coat in MacPherson eclipse emulsion, and finished in Crown Paints matt emulsion in teal. The coving was painted in metallic gold and the artwork created by John at the entrance is a simple geometric design in colours to match the room.

John said, “Once I started adding colours to the house the owner was gob smacked. Room by room, I’d surprise him day by day and he was blow away”. “It was a great opportunity and experience for me, as I was able to let the artist in me out just a little.”

Because of John’s choices in design and colours he now has potentially 45 clients waiting for him to release his creativity on their homes. John Donnelly is a self-taught artist of over 30 years and a time served painter and decorator for over 20yrs. He’s worked up and down the length of Britain as an employee for agencies and umbrella companies, subcontractors, contractors, designers, developers and has been a self-employed decorator with his own company Décor by Design for over 15yrs

Over the years, John’s work has included renovations, restorations, and new builds. He’s worked on both domestic and commercial properties and projects ranging from car parks to hospitals, schools, universities to businesses, shops, shopping centres, council developments and museums, to flats and tenements. Sports and leisure centres to hotels and restaurants.

John takes his inspiration from different cultures and environments and is a fan of the old masters like Leonardo, Picasso, Rafael, Michael Angelo, etc and modern artist like Tuner, Banksy, and even artists younger than himself.

What he loves about decorating is creating something amazing that puts a smile on someone’s face.

If you would like to submit a project to be considered for April’s Project of the Month submit your project using the button below by the 18th May we will make our selection. * 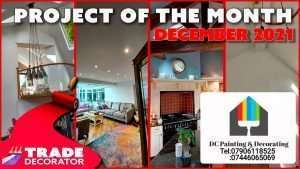 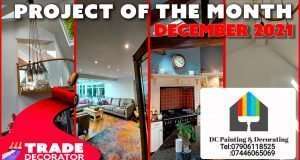