It was a win-win with Dulux and Darryn Dowsett at Dowsett’s Decorating, with the Dulux Colour sensor when he was contacted by Mr McAuley in Lingfield, Surrey in early 2020 to quote to redecorate the exterior of his property.

Darryn’s quotation was provided and accepted ready to be painted this year. It was his first exterior of the year and the client’s only stipulation was that he hoped they like dogs, as they would be shadowed the whole time. The house was last painted over five years ago and Mr McAuley asked for help for suggestions of colours for the walls. They’d decided they wanted cream, but not magnolia. Whilst Darryn tries not to get involved in colour choices, he knew the previous colour was a Dulux colour. Fortunately, Darren had previously won a Dulux Colour sensor, so he fired it up and put it on the wall. After placing the sensor in a few different places on the house, it identified the colour match as Purbeck Pearl. Ultimately, the colour choice was down to the customer but they were happy to trust the match.This made the paint selection much easier, as for opacity and ease of use Dulux Weathershield smooth is Darryn’s go to product for the job.

With all exteriors, Darryn’s first job is to wrap all the windows, as he said, “There’s nothing worse than seeing paint spray on windows”.

This didn’t go unnoticed by Mrs McAuley either, in passing she said,  “You make sure it’s all covered, last decorator didn’t do that”

Darryn then taped Correx in place on all floors, as he feels sheets move too much. Prior to painting, all cracks were raked out where needed and filled with Toupret Toupretlith. Dulux Weathershield Smooth Masonry paint was then applied to all walls. Prior to painting, some of the beams required a thin bead of Den Braven caulk. All the black beams were then painted using Sadolin Superdec Satin. This is Darryn’s go to for woodwork and has been the system he has used for a number of years, as he believes the opacity and durability is second to none.

Usually, Darryn is not one for painting downpipes but was instructed to do so by client. He chose Zinnser Allcoat Black Satin, as he believes this to be the best option for a multi surface product.

A small scaffold was erected to undertake two awkward fascias, but other than that the whole house was painted on ladders. Darryn said,

“I could of insisted on the whole thing being scaffolded and risked not winning the job, but the floors were level all around the house and I really wanted to be part of this project, some jobs you know are going to look mint”.

In total, the whole job took eight days to complete. The trickiest part of the job was painting three small windows at the rear of the property. The tiles were brittle, so the ladders were put up at an angle to follow the pitch of the roof. Darryn placed a few rolled up dust sheets under the ladder to take the bounce out and prevent it from damaging the tiles. Mr McAuley was impressed that no tiles were broken and mentioned, “It’s nice to see people actually care about the properties they work on”.

All in all, Darryn said, “This was a cracking job to be part of, I was assisted by CJ Brown Decorating”.

Dowsett’s Decorating are a member of Checkatrade and Mr & Mrs McAuley were so pleased with the job that they left the following glowing reference.

“Very Happy with the external painting of our home. Darryn and team did an exceptional job, polite and good attention to detail. Always receptive to any requests. First time using Darryn but definitely won’t be the last”

Dowsett’s Decorating offer a professional, friendly and reliable Painting & Decorating service to customers throughout Surrey, Sussex and the London Boroughs. Undertaking all aspects of painting and decorating to both residential and commercial properties, from exterior painting to full interior redecoration.

Darryn had done a few different jobs, then started to work for his wife’s, dad’s building company, and was doing decorating jobs at the weekend. Suffering trouble with his lower back and not getting any younger, when the building company ceased operation in 2015, Darryn decided to take the plunge and go solo setting up his own decorating business.

Through his weekend work, he had built up a descent little clientele list. Starting out with a few rollers, sandpaper and some Hamilton brushes, he took the plunge and joined Checkatrade to build up his list and get noticed. The business has gone from strength to strength and he hasn’t looked back.

Darryn says his success is partly down to the fact that he has a good, tight nit group of decorators he can talk to. They help each other on jobs when needed. Darryn says he’s “Still only a sole trader but can just pick up the phone and ask for bodies when he needs them”.

Having employed people in the past, his experience wasn’t great, as whilst they started off great, he found their enthusiasm for the job wasn’t there.

Darryn is one of the admin on the Southern Decorators Society and through this has been fortunate enough to have met some top decorators. If he has a problem, or an issue on a job, they’re ready with advice.

Darryn has come a long way from when he started his business in 2015 and has attended Dulux Academy for spray courses and wallpapering courses, just to sharpen up his skills. He prides himself on his work, attention to detail and decorating knowledge to help our customers get the results that they want to achieve. He now has a HVLP set up and a dustless sanding system to provide a fully dustless service and this year, is looking to invest further in his business by adding an airless sprayer to his kit. In 2018 he joined the PDA, as he feels it gives him peace of mind as a sole trader,  should any dispute arise and says customers like seeing the badge as it gives them confidence that they are dealing with a professional.

If you would like to submit a project to be considered for July’s Project of the Month submit your project using the button below by the 18th July we will make our selection. * 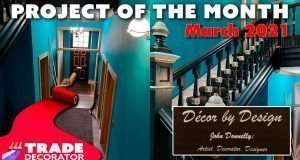