Ceiling of grandeur in the Scottish borders.

Billy Cowe Painters & Decorators have been revisiting this imposing ‘Grade A’ listed Palladian mansion in the Scottish Borders, to redecorate the boudoir following the installation of a grand centre ceiling rose and ornate chandelier from the 1700s.

The interior of this stately homes is arguably one of the finest in Scotland, and the house retains many of its original features, including the magnificent George II period plasterwork by Thomas Clayton, the pre-eminent plasterer of the time.

The mansion house spent almost 20 years as a home for the terminally ill and following that sat empty and unmodernised for many years. The manor house has undergone an extensive 6-year restoration program, to bring it back to its former glory.

Billy and his team have worked on the mansion house throughout the years. The whole house was like a building site and has been renovated from top to bottom. Billy Cowe Painters & Decorators originally decorated the boudoir in 2014. When it was first renovated many of the doors were removed and panelling was put up and mouldings were stripped back to restructure the layout and entrances to the room.

Billy works throughout the Scottish Borders and is very proud of his work and of the work of his team. Billy checks all of the work himself on completion and said, “It must be perfect, and I mean perfect. Our work is to the highest standards, I can’t emphasise this enough”

Born in Duns 1955, Billy lived in the Lammermuir Hills for all of his childhood years – starting school in Cranshaws, then moving to Longformacus.

Billy’s father worked with horses however due to the physical demands, back problems forced him to give up that passion. The family moved to Whitchester House. His father was chauffeur to Mr Landale and his mother worked as cook and housekeeper there. Billy became accustomed to large estate homes from a young age.

Billy left school in 1970, enrolling in painting and decorating college in Galashiels. He attended college for four years obtaining his credentials in the Craft Certificate in Painters and Decorator’s Work by the City and Guilds of London Institute.

He worked for a local decorating business for 20 years, gaining further knowledge and developing his trade skills. Billy started his own business in 1990 – 29 years ago. Next year marks 50 years of painting and decorating and he has no intensions of retiring.

All of Billy Cowe Painters and Decorator’s work is private, from mansions to small flats. His team consists of 4 tradesman who are very highly skilled, and one labourer.

Over the years in the business, Billy has met many interesting people from all walks of life and has worked in many mansion and estate houses, which he takes great pride in the work he and his team have done, and continue to do there.

If you would like to submit a project to be considered for January’s Project of the Month send it to us using the button below by the 18th January where we will then make our selection. * 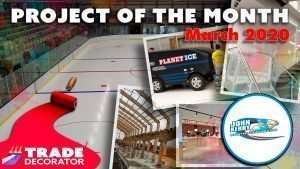 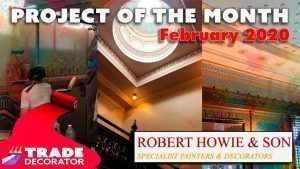 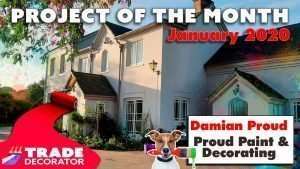 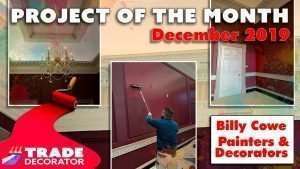