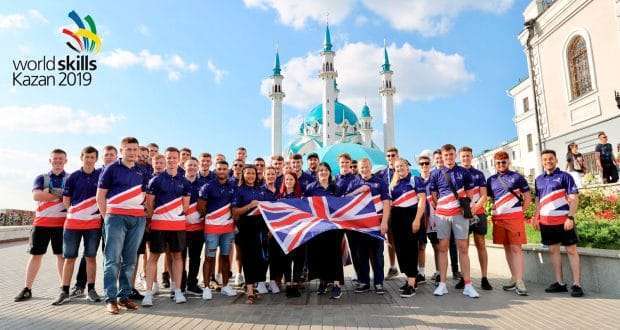 Gold and Glory in Kazan 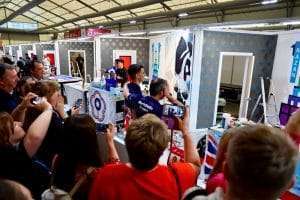 The 37 members of Team UK won a total of 19 medals – two Gold, one Silver, One Bronze and 15 Medallions of Excellence at the event, known as the ‘Skills Olympics’ which was held this August. Callum who represented the UK in the Painting and Decorating Competition was named one of the best in the world when he was awarded a Medallion of Excellence to recognise him reaching the world class standard in his skill.

Callum, who competed against apprentices from 23 counties for 22 hours across four days of intense competition, couldn’t believe it when the results were read out.  Speaking immediately after being presented with his Medallion at a glittering ceremony in Russia, Callum said: “My journey has been phenomenal, and I have enjoyed every bit of it.  To be named one of the best in the world is just amazing.  I am mega proud of my achievements and now having a trade behind me for my whole life is a great feeling.”

Beginning his competition journey at Forth Valley College where he was studying for a Modern Apprenticeship, Callum was put forward for the WorldSkills UK Painting and Decorating Competition which is run in partnership with SkillBuild, part of CITB, by his tutor who recognised his early potential.  Callum progressed to the Finals held at WorldSkills UK LIVE, where hugely impressed with his talent WorldSkills UK, the organisation responsible for selecting and training Team UK, invited Callum to join its two-year development programme.

The task of preparing Callum for this one in a lifetime opportunity was the responsibility of WorldSkills UK Training Manager Mike Swan, a Curriculum and Quality Leader at Dundee and Angus College. Mike devised a training programme which had to be fitted around his employment and Callum’s apprenticeship with Clackmannanshire Council and he is quick to add that the support of both organisations was vital to Callum’s success.  Mike said: “When Callum’s result was announced I was over the moon for him.  The programme by its very nature, which included training sessions in China, Russia and Hungary,  was not an easy journey for Callum but his dedication and determination won through and he thoroughly deserved this.  He is a true ambassador for our industry.”

WorldSkills is billed as the toughest skills competition in the world and the reason for is because the competition tasks are only unveiled to the competitors on the first day of the competition.  This why the event is considered to be the ultimate litmus test to compare countries’ readiness to compete economically.

Callum had a sound understanding of the technical requirements through his apprenticeship training, and Mike’s programme focussed on helping Callum complete the tests, which included paper hanging, colour matching, lettering and a speed test to the exact WorldSkills requirements within the strict timed conditions.  Callum won the speed test so he can officially say he is the fastest painter in the world and his free design, which was based on Bansky’s famous EU mural, received a high level of praise from both judges and spectators.

Callum and Mike’s success will be further celebrated at this year’s WorldSkills UK LIVE when they will be honoured at a special celebration along with the other members of Team UK.  This event will also see the next group of apprentices selected to represent the UK in Painting and Decorating at WorldSkills Shanghai 2021.

Callum was supported in his training by Crown Paints.

To find out more about WorldSkills UK Competitions visit www.worldskillsuk.org